We are ready to study the actual plastic molding process cycle in the press room inasmuch as we have become familiar with not only the component parts of the mold itself but also the materials which are placed in them.

The method of loading the cavities varies in accordance with the design and size of the part to be molded, the capacity of the die, and the style of mold. Preforms or powder can be used and sometimes both, but wherever possible it is more economical to load with preforms. In using compressed pellets special loading racks are usually constructed in order to bring the bench operator’s time down to a minimum. This rack or loader is made in such a manner as to permit the preforms to fit into proper sized receptacles and contains the number of impressions to correspond with those of the mold. The operator loads the rack during the time that the previous heat is being cured and is thence ready to place the entire load into the lower section of the die after the finished pieces have been ejected. The loading rack can be made of either a heavy cardboard or cheap lightweight metal material and is constructed so as to permit the bottom half, which retains the preforms, to slide back and forth and release the load when placed over the cavities.

When powder is used, as is often the case in molding pieces which have depth as the greatest dimension, the charge can either be weighed or measured volumetrically. Both methods are comparatively more arduous than the use of preforms, but by predetermining either the weights necessary on a balance scale or the size of measuring device to be filled, a certain amount of accuracy is obtainable.

With the mold now loaded the operator is ready to 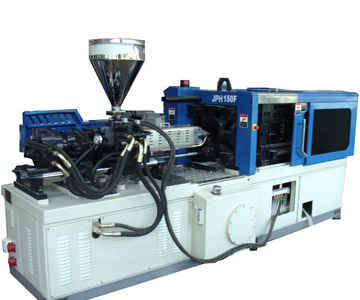 . The press itself will be dealt with in a later chapter, so suffice to say at this time that there are three distinct operations involved in just closing the mold. The operator first releases the low pressure valve which starts the ram slowly upward until finally it comes in contact with the upper half. It is then necessary to throw on the high pressure (about 3000 pounds per square inch) momentarily release it in order to permit the escape of trapped gasses and moisture. (This is done very quickly in order that the plasticized material will not become chilled) and finally apply the high pressure for closing and subsequent cure.

This releasing of the pressure after closing is called gassing but the operation is not necessarily an essential part of the molding cycle. Gassing is resorted to chiefly in the molding of pieces with thick sections and the correct moment for releasing the pressure has to be determined by trial and observation of the finished part. Very often it is found unnecessary to gas a mold inasmuch as the pieces do not require this release of volatile matter. The design of the article, however, is the determining factor in every instance.

The cure time is the number of minutes employed in keeping the trapped material under combined heat and pressure and varies anywhere from forty-five seconds up to as much as ten minutes. This is further governed by the size and design of the piece being molded. Thick sections require a longer time than thin ones and pieces having depth very often have to remain under pressure for a longer period in order to permit the material to flow up the sides of the mold and completely fill out the piece. The time required, however, has to be first determined by trial and error inasmuch as every new item has different characteristics in design. Time clocks are often used to guide the operator in ascertaining just when to open the mold, but very often the ordinary sand glass will suffice. Some plants have large second recording clocks installed and so placed as to permit every operator to view the passage of minutes and fractions thereof. This diminishes the need for individual clocks or sand glasses. After the pieces have had sufficient cure the operator releases the valve and the ram starts to slowly return to its original position.

On the so called self-contained type of press the high and low pressure is regulated by the machine itself and in addition to this the operator may be provided with a cycle controller which is adjustable to required curing conditions. With this type of equipment, the cycle time can be predetermined and set on the controller and by use of cams the gassing can also be made automatically. Under such conditions the operator has to merely load the mold, push a button and the mold will close and reopen in a specified time according to the setting previously made on the automatic controller. 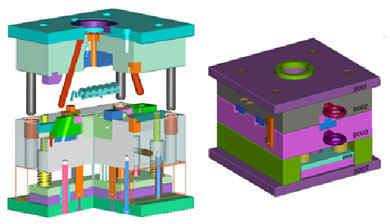 The matter of releasing the molded pieces from the cavities is the next matter for consideration. In the first place, it is obvious that the pieces will be found clinging to either the top forces or the cavities, or, perhaps, both depending on the design of the die and the pieces. There are two methods for getting these parts released, the first and most general being by use of ejector pins, sometimes known as knockout pins. If the parts remain on the top forces (this is accomplished by placing small undercuts on the plungers), pin bars are incorporated in the die so that, as the ram descends, the pins are drawn down and exert sufficient pressure on the pieces to release them. By this method the entire heat is automatically ejected at one time and the operator merely places a tray underneath and catches the full load. Where the parts remain in the cavities the same principle is utilized except that the knockout mechanism has to push the pieces upward for subsequent removal and the operator must remove each one manually. Very often a comb-shaped board is used to lift all the pieces at once, the only other necessity being compressed air to blow out the entire heat.

In less frequent instances the design of the product precludes the use of knockouts and in such cases the operator has to resort to blowing the molded parts out with cold compressed air. Every press is equipped with a compressed air line on the end of which is a brass nozzle. This is normally used to clean the mold after the pieces have been ejected. After each heat a certain amount of excess material known as flash still clings to the outer sections of the cavities and has to be thoroughly cleared before the next charge is placed in the mold. As previously explained, temperatures averaging 350° F. are utilized during the molding process and hence when the material is exposed to room temperatures after the mold commences to open, the drop in heat causes a shrinkage of about .006″ per linear inch. As a result, the piece will either cling more closely to the top part of the die or tend to release itself from the cavity if it happens to remain there when the mold opens. The application of cold air blown on the piece abets this shrinkage and it is for this reason that parts can be released by such a method. The use of compressed air blowing is a much longer process, however, and resorted to only when ejector pins are not applicable. Very often metal inserts are required to be molded into the completed part, but they are placed in the mold before it is either loaded or closed and their use merely increases the cycle time proportionately.

As a rule the operator is furnished with tote boxes at each press and in these he places the finished pieces. When full, they are then carried away to the finishing room for number checking and first inspection. One man can operate either one, two, or three presses at a time depending on the type of work and length of cure time required. His complete cycle consists of loading, curing, and ejecting and the cycle time is used in computing the cost of molding the pieces. This will be referred to in detail in a later chapter dealing with estimates and costs.